It's the European fight for independence that has shocked the world.

Just two weeks ago, the separatist government of Catalonia held a referendum on independence to separate from Spain.

But one Southampton resident had his own take on some of the story behind the news.

Oliver Hall was one of only a handful of international artists to win a residency in the Catalan town of Riba Roja D' Ebre and the chance to produce his own piece of public art inspired by the region. 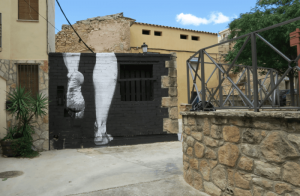 The graduate of Fine Arts in Southampton took a traditional “footrace” which has been run by local residents since the 18th century as his inspiration and created mural to depict the annual event.

He said: “I painted a mural ·illustrating legs running. My intention was to express a parallel·connected through time in the same activity throughout the villages history and the the River Ebro infinitely running and carving its path through the valley “.

He also produced a time-lapse of the mural, with the accompanying theme, Hymn of Catalonia, that was once banned by the Franco regime. he added: “The song was played every day in the town square, between announcements next to where I was working, so there's the connection with the Catalan identity. People were definitely talking about the issue a lot and it was interesting to hear what they had. to say. It's definitely an interesting time to be working in the region “.

Now his footrace mural is part of an arts festival set up by fellow Sotonian Sarah Misselbrook -, who now lives in Spain.

With support from the local town council, she set up a rock festival which has expanded to include visual arts in 2016.

The former City College lecturer 40 years old, who still delivers workshops in Southampton when she comes back, said: “We·call for applications·from both local and international artists each year, with the residency taking place each summer. This summer saw Oliver create a large scale mural in the Placa del Forn, which has been very well received, working alongside other artists “.

The footrace is presided over by local officials and is accompanied by live music, with traditional prizes of a cock for first place, a rabbit for second place and an onion for third place, as well as trophies and cash prizes which have been added to the traditional awards.

But it is not Oliver's first piece of public art: he has also had his large scale drawings displayed on the walls of Westquay as part of a project giving space to local artists.

The landscape he exhibited was a drawing of Fawley oil refinery made with discarded engine oil thrown out by his mechanics neighbours.

He said: “I'm still learning how to use the oil, it can be quite difficult to work with”.

Sarah plans to extend the artist residency for two weeks next year and said she would love to make more links with Southampton.